Wests Tigers have today confirmed that the Club has released Martin Taupau from the final year of his playing contract.

Taupau has played 45 games for Wests Tigers over the past two years and will depart ahead of the 2016 season.

Media reports this morning detailed a confidential email regarding Taupau’s contract with his new Club, this correspondence was not from Wests Tigers.

Wests Tigers CEO Justin Pascoe said that the decision to release Taupau was made after much debate.

“While it’s disappointing for our Members and fans to see Taupau leave the Club he had made it clear that he intended on playing elsewhere from 2017 onwards,” said Pascoe. “Earlier this year the Club was negotiating with Taupau to extend his stay at Wests Tigers. We put on the table what we believed was a fair offer but ultimately he has decided to continue his playing career elsewhere.

“The decision to release Taupau early not only improves the Club’s salary cap position but as a consequence will also help to secure some of the young talent already with the Club.

“The negotiations regarding releasing Taupau have been going on over the last week and our organisation has been doing everything possible to be respectful to Taupau, our Members and fans as this is a sensitive issue for all,” said Pascoe. “To see all of that work being undone and for the story to come out in this way is disappointing and almost comical.”

“We’re confident that our roster, including a number of new recruits, will lead this Club well next season,” said Taylor. “The Club has been working hard to improve depth across every position and we have players ready to step up.

“We return to pre-season training next week and all of the players are keen to get back onto the field and prepare for next season,” he said.
Krump

Sounds like we got nothing in return.
He was signed as a bench player from the dogs so can't have been on much coin, the salary cap pressure excuse from the Tigers smells like bullshit to me. How so many different coaches and CEO's in a row can fuck up recruitment/retention is really beyond me.
No Worries

Cause Robbie is staying and Cherrington is too small to play 40 minutes each week ?
Krump

Cause Robbie is staying and Cherrington is too small to play 40 minutes each week ?

I wouldn't put it past the clowns down at Concord. If we do end up with Ballin I swear I'll set the bloody joint on fire with Pascoe and Go still inside.

Leaked by a Canadian Theater Critic...

@Krump wrote:
I wouldn't put it past the clowns down at Concord. If we do end up with Ballin I swear I'll set the bloody joint on fire with Pascoe and Go still inside.

So will we lose Cherrington next? Fuck's sake.
No Worries 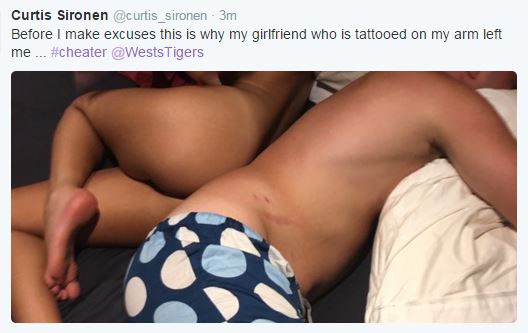 This is what happens when your club signs too many hookers.
No Worries

If only he was facing the other way he could have been practicing his spooning.
No Worries

His GF hijacked his twitter. His profession was lasted as : Professional Cheater, it's all gone now
Guest

Your Name wrote:His GF  hijacked his twitter. His profession was lasted as : Professional Cheater, it's all gone now

Yeah I saw that. He doesn't have anyone to blame but himself

Also who has sex then puts on pj's? Surely you sleep naked so you can slide in for round 2 later on

Your Name wrote:Robbie hands back captaincy

Well then.  Ballin and Farah as a hooking combination is redundant.  Cherrington has to figure in there somewhere.  So is Ballin playing ressies, as he was potentially without a club anyway?
Honeysett

Knights will take Ballin or Farah. We're not a picky bunch. All my Tiger mates and my sister are boycotting Tiger membership next year. They're so frustrated by the way the club is run.

@Honeysett wrote:Knights will take Ballin or Farah. We're not a picky bunch. All my Tiger mates and my sister are boycotting Tiger membership next year. They're so frustrated by the way the club is run.

We have a perpetual system now, where you have to opt out by early October or they roll it over so the members numbers will be better than reality as a lot of people would have missed the deadline to protest.  I'll be a member every year but easier to say when it's only costing you the $120 being over here.

Yes, they are a bunch of gooses running the joint, but not renewing your membership can only harm the club more in my mind.
RandomSil

Tigers looking good in the offseason.
No Worries

JT won't be happy with this. Siro is looking a bit soft around the middle like he's been enjoying the off season a little too much.
Go to page :