As a bridge to Lomax, I assume Mbye is a no go on the basis that when Talau returns he’s likely back to bench?
Jumping Marlin

Haha. Article on nrl.com has Taylor as one of three contenders for Qld #6.

@Jumping Marlin wrote:
Haha.  Article on nrl.com has Taylor as one of three contenders for Qld #6.

How is there even a shortlist? Munster, Munster and Munster.
Rippin and Tearin 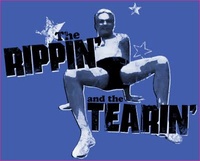 @Jumping Marlin wrote:Quick update on the overly complex centre analysis from earlier.  Thx for the feedback.

As R&T articulated nicely - very subjective, and good as a gut feeling check!!

A few updates based on feedback:
> Added Momo
> Put in two rows for Momo & Burton.  Different Ratings for job security when we know more next week
> Injury risk: while most are at a 10, I think that's OK.  Only wanted to penalise the really injury prone.
> Job security / team quality:  Have used the full scale now.
> Player quality: question was why Cini and Lomax both got a 10.  The challenge here was that the projected 2021 average was already a heavily weighted (20% of score) criteria to player quality. My intent was to penalise players who score better in fantasy than what they are like in IRL.  I kind of feel like this is probably already captured in job security anyway. So I ended up changing the weighting of this category to 0%.
> Also, a suggestion that value for money is more important (especially earlier in the season), so a cut with a 30% weighting also shown. 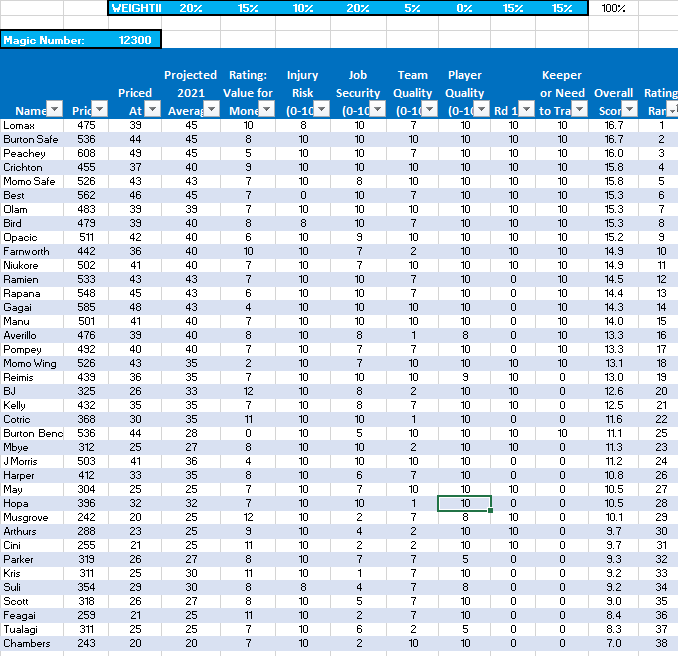 More Weight to Value for Money: 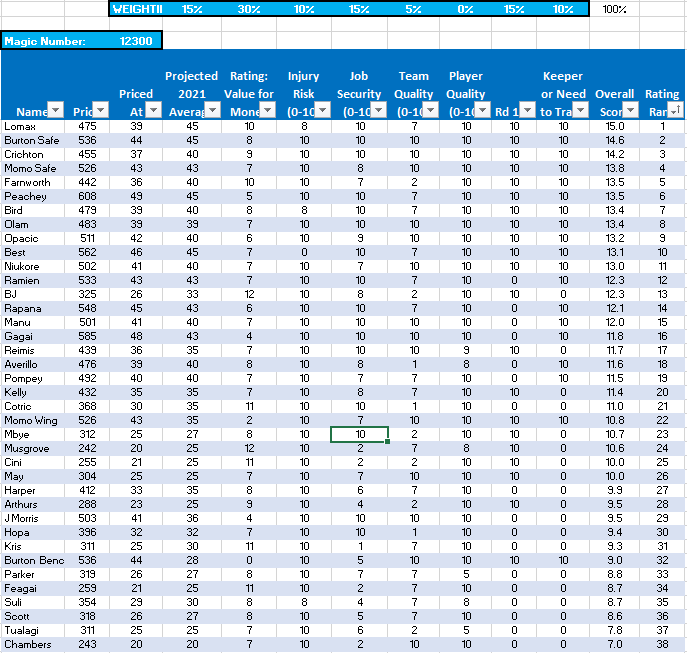 I think this is cool, and really useful. @MTB, if you were ever thinking of going even crazier than you already are on your website, I would suggesting something like this. I would set up the tool so that the weightings could be user controlled - so if you wanted to mostly weight on value you could, or on expected points, you could do that too. Then, for the data that goes into the projections, to make things simpler, I would make them objective only. So you'd have to exclude a bunch of columns.

Imagine how cool it would be though if you site had a tool which essentially could generate (and rank) a short list of trade in options, based on the user preference for the type of player (value vs scoring etc) that people wanted.

And nice stuff Marin and thanks for recalculating based on diff weightings...

Only every a gun when he was GK as well, won't have that at Titans either

Fog should be even more appealing with Boyd shouldn't he? Taylor was taking some KM

Yes, I think you're right on both counts.

Taylor was pretty variable, some 0KM games, some minimal 50KM games, and a couple of near 200KM games.
The only time Boyd had decent KM was when Fogarty was off for the last half hour.

Maybe worth a few points in KM, it may also put more of the attack through him?
WT2K

@Jumping Marlin wrote:
Haha.  Article on nrl.com has Taylor as one of three contenders for Qld #6.

Selections for this week are tough.

Think I’ll need a CTR in case Momo doesn’t find a way back into the team. Welp the one thing I didn’t want to do was spend there

Reasons for both have been mentioned over the last few days pages.
Shady2K

Yeah, think I’d hold too Shady. How many trades you got?
TPJ move is most interesting for me. But is pretty pricey now and ‘May’ play oranges

@Liverpool_Bulldog wrote:Selections for this week are tough.

Think I’ll need a CTR in case Momo doesn’t find a way back into the team. Welp the one thing I didn’t want to do was spend there 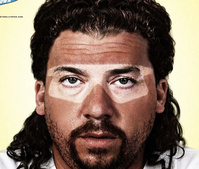 How long are Green and Pearce out for?
Shady2K

@Liverpool_Bulldog wrote:
Round 15 is a 4 trade round aswell isn’t it. So you’d get 12 trades between those rounds

According to casualty ward:

Means Mann for 4 rounds before Green comes back. Now I’m not so keen
Liverpool_Bulldog

Haha what a fiasco that was
Liverpool_Bulldog

Yeah I’m starting to lean that way. Isnt overly glamourous though is it
Welshy

@Liverpool_Bulldog wrote:
According to casualty ward:

Means Mann for 4 rounds before Green comes back. Now I’m not so keen

Although just had to check and he has a 3 game average of 66 with Green in the team and playing 80 minutes. So all is not lost at all until Pearce comes back but by then he will be moved to a round 17 gun

Just looking at rounds 6-9, Green averaged 384km and Mann averaged 214km. That's some Cleary level km that Mann can take on and beast until at least Round 12