@Mr Snrub wrote:I'm starting with Isaako. Even playing for a team as bad as the Broncos last year he still put up some decent scores at fullback. The risk of those scores in the 20's is there but for the price paid I think he's good value.

He's *still* playing with a team as bad as the Broncos though.
mattnz

@sgdragons10 wrote:hey guys i posted my team in the assistant coach thread if you guys could check it out

You should update the team tracker link in your profile. It takes you to your 2020 team
Cookie Monster


For those who have not seen it already, the Fantasy Fantasy thread is open for business

He's *still* playing with a team as bad as the Broncos though.

This year's broncos is looking like last year's. Missing key players in their forwards from last season and their best back in Staggs.
rhinoceroo 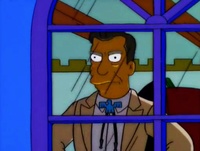 For those banking on the 'Tedesco Starts Slowly' theory, when and how exactly do you plan on picking him up? Its going to cost you whatever Teddy's worth plus a cow; probably around $900k-$1mil. You're basically banking on one of your guns getting injured or a mid-ranger rocketing up in price within 3-4 weeks to bridge the gap - however, there'd be the temptation to keep them to maximise price increases.

The 'Topes have previously subscribed to this theory and hoped to capitalise later in the year, but by that point there's usually more issues to address than at a poorly managed nuclear power plant. This year we're trying something different.

The Mayor of Alburquerque.
Mulvy

I'm with Welshy on this one. Just don't trust the value at WFB. Will be Teddy/Pappy/Nuffy.

The Nuffy is unlikely to be Hoy. Happy to punt on Laurie if named, maybe simonsson, niu, ieremia or even, gulp, Moylan if nothing turns up.
Antipodean1 @Camo123 wrote:Teddy actually averaged 68.8 under the 6 again rules in regular season (above 60 mins, which excludes when Sivo ran over him, 66 regular season with it included)

OK that does it I am locking in Teddy, with a little added kicking, there is too much of a drop off with the FB possie this year.
TheWeapon

@Welshy wrote:
On paper RTS and Papy looks so much stronger, but Tedesco Is tough to get and you are already planning on trading Hoy to a different stepping stone before even getting Teddy in. I’m currently on Teddy and Papy because I hate the value in WFB

I currently have RTS and Papy, but I can see stinkwaves coming off RTS....I'm not convinced he'll be better than last year. Would love to find the extra 200k to swap him for Teddy, but I don't think I can happily do it...
Tookey

Alot of talk about not starting with the likes of Teddy or even Cleary. Yes they may drop in price but even so a few injuries elsewhere can change a whole gameplan.
Chewie

@Ponga Yeo the Mann wrote:Someone talk me into or out of Milford

2020 was the year from hell for Milford. He started of well the first 2 rounds pre-covid, with the young bucks looking full of promise for the new season ahead.
I'm not sure what happened during the lockdown, but the Broncos returned to the field a different team in round 3. Some may call this the Seibold effect.
Fantasy wise Milf's scores plumetted to a sub thirty average, he lost his Mojo along with the rest of the team.
Now with a different coach, who has a playing philosophy that suits Milfords game, things can only improve right?
Potentially add CS9 to the mix and you are of to the horses. 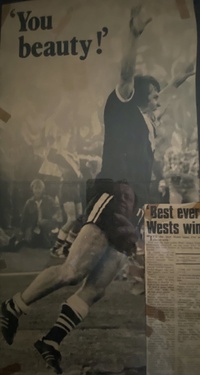 @Milchcow wrote:
On Laurie, if he doesn't start I won't have him. He's cheap so when he does start he'll be easy to bring in then.
the worst possibility is named in 18 but late game day inclusion. Tigers play late so trade out options may be locked out

I think Laurie starts thanks to Brooks’ GK while Doueihi was on the field. Doueihi is going to kick in Rd 2, and in so the Rd 1 Mbye would be the logical kicker. Since Brooks was kicking, and has never before (as far as I know) Mbye mustn’t be starting in the 13. Mbye’s injury was never going to keep him out of Rd 1 apparently.
mintotheimmortal 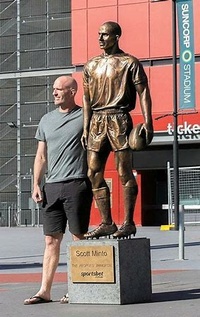 Milf's a really hard player to project this year. His 2018-2019 +50 average was built on the back of 360km per game - which is not going to happen. Prior in 2016-17 he averaged 45 with 140KM per game. Last year's disaster he had 235km per game for his worst average ever but in that team its not surprising. Even in his good years he threw up a 20-30s every few games. Surely there's some improvement from the change in system. His KMs give him some base, but his potential is all contingent on converting attacking stats. Priced at 32 so he's only got to get to mid 40s to be a success.

I guess the worrying thing is that Carty had a +50 season and we all know how that party turned out in the years following.
mintotheimmortal

Also a bit of personal bias as I’m a big fan of him but is leota a genuine option?

Leota has never played more than 43 minutes so Is hoping for approx 50 a game too wishful?
The Pascoe Fiasco


This is exactly what happened to me mate, Teddy at 850k gives me the speed wobbles bigtime.

But like Welshy said earlier getting Teddy in at the back end can get really hard.

I just can't bring myself to start Teddy when I have choices between Brimson and RTS to work alongside Papy to start the year out.

Not having Teddy is not the issue, as long as the money you save is used wisely. As long as you have angus or Cleary for Captaining purposes, then does Teddy and Welch equal the same score as Paps and Harris for example. One on one then there is no comparison to Teddy, but going without Teddy potentially upgrades two or three players. Good luck not owning him though.
The Pascoe Fiasco

Positionless benches mean you can trade someone like Watson to Teddy when he makes 250-300k. The next week (or the same week) you can downgrade your mid range WFB for a cash cow

Why are you getting rid of Watson in this scenario, he must be close to a keeper. Also, if you don’t start with Teddy, when are you going to get him in? Post Origin I suppose.
The Pascoe Fiasco

@mintotheimmortal wrote:Also a bit of personal bias as I’m a big fan of him but is leota a genuine option?

Leota has never played more than 43 minutes so Is hoping for approx 50 a game too wishful?