I'm glad you limited this thread to season 2020, otherwise I think I could just about take us into a page 51 party all on my own extensive list over the many years.

I've definitely been guilty of being trusting my own thought process too much in the past (yeah arrogance), especially in the starting squad and need to be much more cookie cutter.
Tookey

@filthridden wrote:Had Lomax for one round. He was named on the wing next round so I sold him.

Ouch! Was lucky to keep him the whole season. Was always waiting for him to burn me but that never happened.
robelgordo

A lot of these aren’t really mistakes. For example, Stimson and Williams made sense at the time. The outcome was bad but the decision process was ok.

The worst mistakes for me were:
- no DFifi R1, just trying to be too clever
- getting the bonus trades and subconsciously deciding I should force a few moves I would’ve never otherwise done. Young and Butcher were ordinary picks. It didn’t affect me immediately but at seasons end I ended up with a pretty ordinary 17 and no trades to fix.
- I moved out Rudolf before JTB, which left me 2k short of DCE the next week. In retrospect I think a closer review of their performances would’ve led me to go the other way
Revraiser

Smashing beers in the lead up and 1st half on super saturday, then struggling to stay awake for what was meant to be the 'golden' part of the weekend !
my tv broke

Oh yeah, i traded in Curtis Scott late in the season... classic
easytiger

I thought Holbrook might be able to magically improve his defense and general game-sense... I was wrong.

And here's what I have to say about my selection;
What an idiot... oh the horror... missed 7 tackles in his first match out against Canberra...

This is where I think unless it is an indisputable selection (everyone will own him because there's just that much value to be had), it's better to avoid ugly players - it just feels worse watching a guy you hate watching. 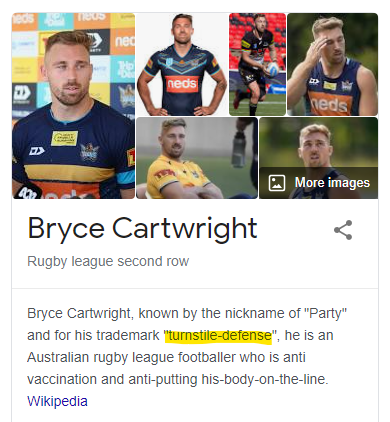 The top right-corner is me for the two-rounds I owned him (I dropped him before he was about to line up against David Fifita - ironically, he also got dropped, but for the record -> I dropped him first!)
Archer

I don't have time to list everything I did in 2020 so probably easiest just to list "signing up". My other biggest mistake would be not shelling out enough for a certain captain choice each week
Snatchpato

I can do you all one better re: starling.

I had him since the start of the season and ended up trading him out one or two weeks before Hodgson got injured. That one stung.
rhinoceroo

I've made a team with Latrell in that I don't totally hate. Where's the 2021 thread?
multiple.scoregasms

- Lomax was (and still is) terrible at fullback. It was fully justified not picking him on the assumption he wouldn't last in the position. I, however expected he would end up in and out of first grade rather than locking down a centre spot

- Not starting with Haas. He had any almost perfect 2019 and it was unlikely he was going to back that up in 2020 without a single injury or suspension. It would have required the best fantasy season of all time to justify his price. I saw better value in Cook and Taumalolo. Could not have foreseen the entire Broncos pack getting injured/suspended, Haas playing 80 minutes regularly and actually having the best fantasy season of all time.

- Not grabbing Starling or Randall. Starling was a bench hooker behind a much more established Havili, playing for a coach that regularly puts rookies on ice. Prior to last year, I could count on 1 hand the number of times a bench hooker had played over 40 minutes in the last 5 years. I had him pegged as a max 40 minute, 30 point guy but expected more like 30 minutes 25 points. Didn't expect Ricky to hand him the reigns so quickly

- Holding Friend too long. Their was always a reason, always some upside to him finally making cash and scoring points. Kept getting benched or injured and I held far too long.

- Trading in Magoulias over Grant that first week. I was a big Grant truther, but thought a starting lock would outscore a bench hooker, as well as Magoulias having a negative break even. Queue Grant scoring a try on debut and comfortably outscoring Magoulias.

- Forcing trades during the Harvey Norman bonus trade round. I felt like I had to make big moves that week and ended up trading out Lucy the week before his 100, trading in Hudson Young AND grabbing Havili. I would have been much better off waiting a week instead of trying to manufacture cash cows

So what lessons have I learnt? Don't try to manufacture cash cows. Every single week there will be new options available. If none of them are good wait a week, cop the 10k cash loss and don't burn that trade.

For the run home I might be better off with slightly more popular players who will score slightly less points rather than the POD. If they fail it hits everyone vs just the POD ruining me
Go to page :