This is the thread for the new FF NRL.com fantasy Draft League/Leagues. As newly set up, the first to enlist will be placed in League1 and if we get enough extras I will set up a league 2. Current draft crop below

I will random generate a draft order when filled and post, so everyone has a little time to get used to their draft position. Standard snake draft and Will set draft to likely 12 hour timer so plenty of time for picks before season. I'm hoping draft start time can be altered after league setup just incase not everyone gets round to reading this, otherwise it's Saturday 8AM not sure what time zone (will update)

NO captains
NO rolling lockout
emergencies

In the draft please be vigilant in checking your draft turn, 12 hours per pick. Only takes a few minutes to log in and check if you are up or your turn is soon. If the 12 hour timer runs down on same person more than twice, you will be removed from the league and replaced.


Code under spoiler for League 1 listed only. Please join ASAP

2 teams promoted from league 2 (ladder position 1 pre finals series,  and winner of final series) if same teams does both the runner up in finals goes up.

Still a spot open you daft cunt. No one has received a personal invite unless they expressed invite
B/L

Is it really a league If I'm not in it though.
Mulvy

If invited, would you say,

B/L wrote:Is it really a league If I'm not in it though.

Stupid Berk. Yes or no?
Welshy

@B/L is in. League 1 filled. any further interest will go into League 2 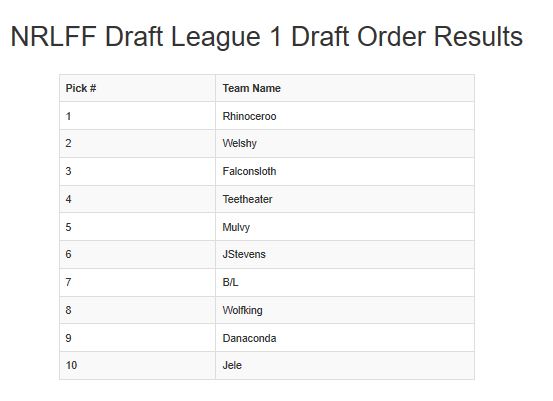 rhinoceroo wrote:Downside of being #1 is the hours spent switching between Cleary and Ted

I'll swap positions with you if it's too difficult.
Camo123

10 man league with captains on is going to be brutal

Ended up at the backend again 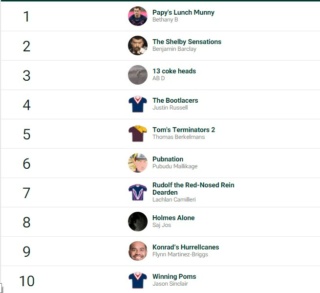 I'll swap positions with you if it's too difficult.

Damn, actually got a good nights sleep and I've missed the boat!
Welshy

Will sort another league lads. I’ll drop down into 2 with someone else hopefully and I can adjust to 2 8 team draft leagues
rectangle

if another league pops up would be keen to join.
danaconda86

Thanks for organising Welshy!
Love a slow draft!

A 10 team league would def be preferable to 8 team...teams are too stacked with only 8.
Any chance of having a buy-in?
No Worries

He invited a bunch of plodders he knows he can beat. It's like he's put a team together that are aspergers as fuck and challenged them to a rugby match.
Russ 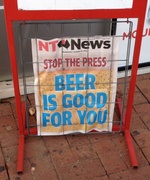 If a 2nd 10-team league starts up, I’m keen if there’s a spot open
Welshy

Have 4 already for second league. I don’t want people missing out so if I can’t get the additional 4 or 6 tonight/tomorrow I’d prefer to make it inclusive and drop both leagues to 8’to get people involved.