You still named Sam Rapira instead of Shannon McDonnell
mattnz

You still named Sam Rapira instead of Shannon McDonnell

Umm, oops forgot to post one. Sorry about that

If anyone wants to chuck together a quick team now I'll score it, but it just slipped my mind
filthridden

Hahahaha I remember this origin game as soon as I see Gallen get dragged into touch.

Umm, oops forgot to post one. Sorry about that

If anyone wants to chuck together a quick team now I'll score it, but it just slipped my mind

My advice would be to exclude Gal from your team

R18 scores whilst we wait 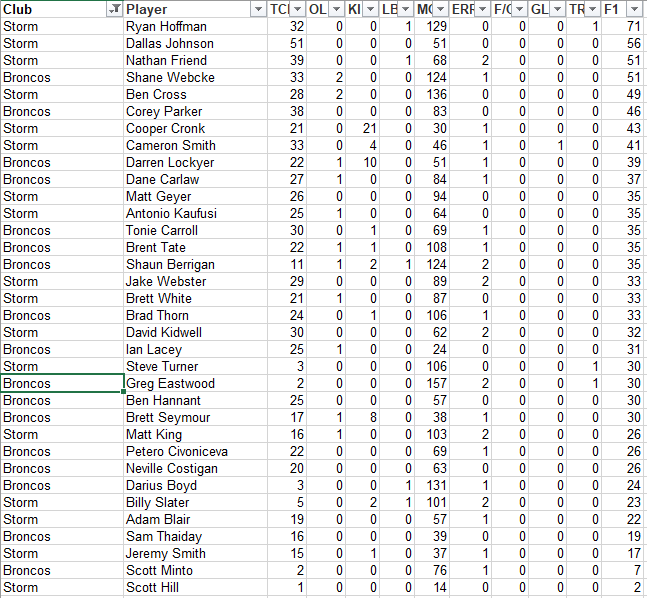 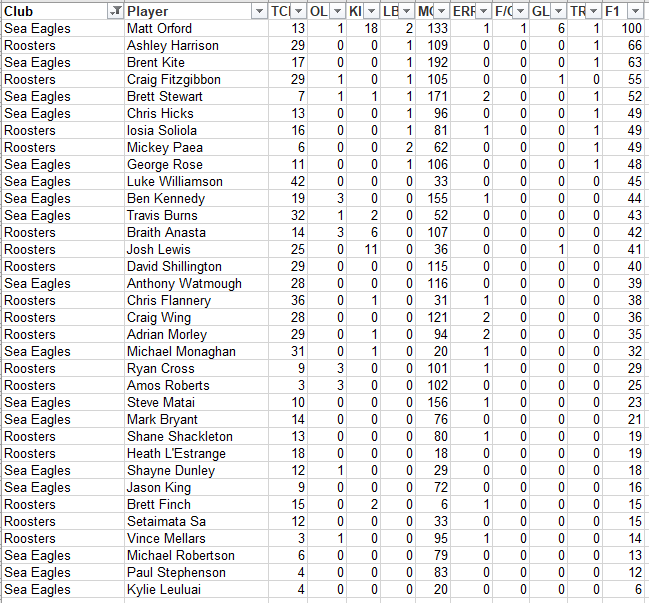 I didn't know the scoring futures of many players when we started the comp, but Schifcofske was one of them, and it pained me so greatly to see MS trade him out shortly before he went on a run of excellent scores. 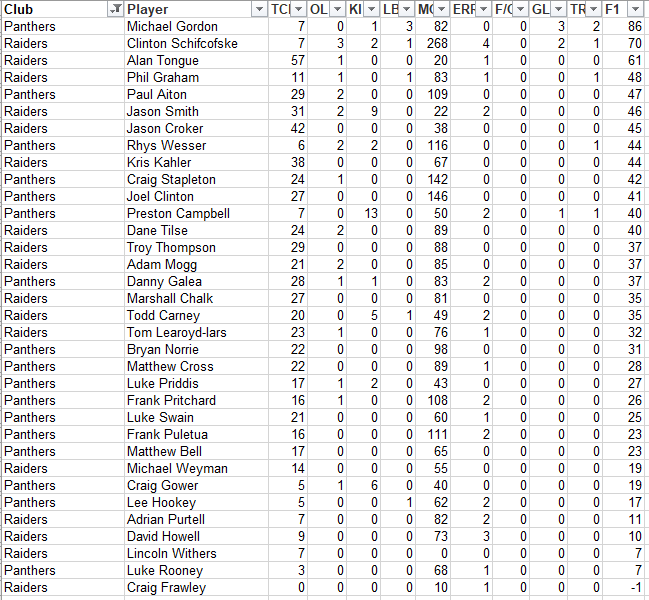 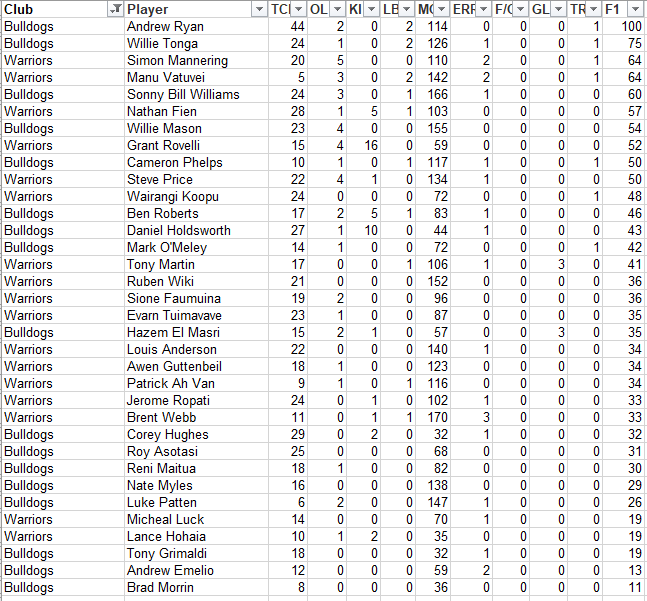 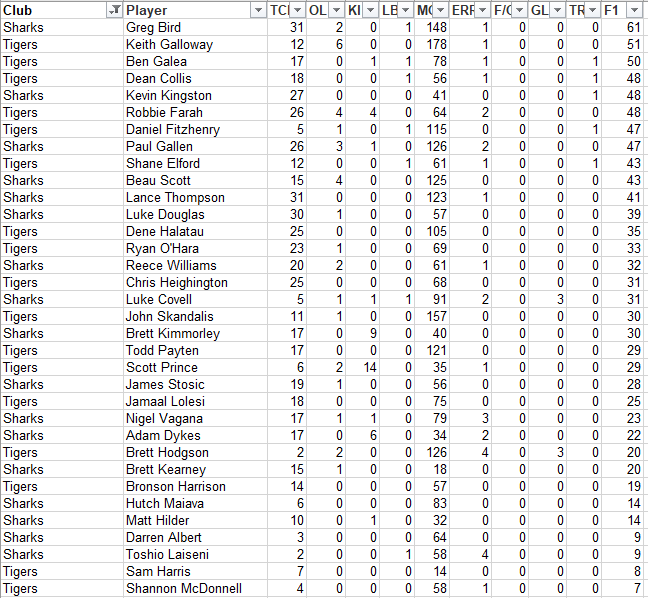 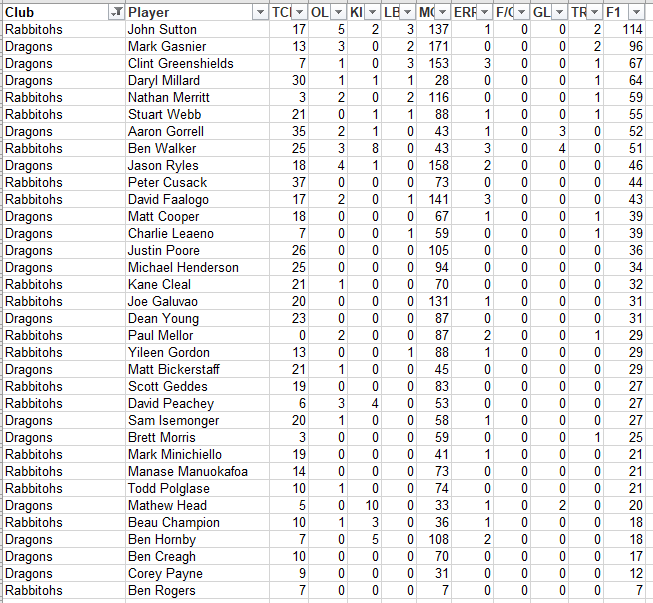 The Newcastle Parra game R18 is on Youtube. Its the game where Andrew Johns becomes highest point scorer in the game. Will link that tomorrow with the full R18 stats and put R19 up at the same time too
filthridden

Almost made a last minute switch to start McDonnell over Gordon. Fucking hell.

Gasnier - looks like everyone traded him in this round so most will grab that score.

I'm stoked with Aiton, Collis (as usual), and Alan Tongue getting back to scoring well.

Tilse my lowest scorer so far with 40. Having a great round.
702 + Hindmarsh, Hayne, Johns and Carmont.
Clack Bocks 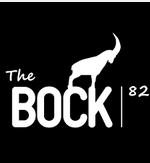 This gorell was a hidden treasure
Welshy

Highlight of my round is Kennedy and Lance both going in the 40s and not being an owner. How sad
code delta

@Welshy wrote:Highlight of my round is Kennedy and Lance both going in the 40s and not being an owner. How sad

Fuck you, Michael Gordon. Fuck you.

And while we're at it - fuck you, too, Paul Aiton. He hasn't skipped a beat since I traded him out. Was a busted sac when I owned him.

Holy shit, glad I got in on the Gasnier selection surge when I did.

Having an weak/okay round so far - a lot around the late 30's/40 mark, but on a few of the big scores (as is everyone else).

Most pleasing score- I went with Josh Lewis as my cheapie option to accompany the Gasnier trade in. Genuinely never heard of the guy in my life but was named in the halves with Anasta both rounds this week. BE of 0 and two scores around 40 posted so far this year (and only played twice). Bit more expensive than Brett Morris but hopefully a little more reliable to make my last bit of cash. Scored 41 this round - better than two of my main halves in Lockyer and Carney. He's in my NPR, but solid money making I hope. So far, my best scoring half - Rovelli - also in my NPR.

I actually think Carney was too, this week.
Teeth Eater

Jeez, even as a NSWlander, that's a pretty impressive try. How's the pace on the young man?!

Far out, that was pretty depressing Saturday night vision.