There are also a heap of positional changes which are going to make one position particularly tricky.

WE NEED TO TALK ABOUT CENTRE/WING (CTW)

The first thing you will notice when you start picking your 2020 squad is that picking you CTW is going to be a whole lot harder.


The following true backrowers (2RF) have lost their dual-position status:

In addition, 2019 2RF/CTW king Manu M’au has left the game altogether and gone to play in the Super League.

To make things even harder, the following fullbacks (FLB) are no longer also available at CTW:

It’s not all doom and gloom though, these players newly dual-position eligible at CTW:

Alex Glenn - When things got desperate out wide at the Broncos near the end of the season Glenn was picked to fill the gap at centre. However, even when playing the full 80 minutes at 2RF Glenn is only a 45-50PPG player so he makes little appeal as a safe CTW pick.

Isaah Yeo - This little bit of serendipity does appeal though with Isaah Yeo being gifted dual 2RF/CTW eligibility after covering in the backline through the middle of the 2019 season. Yeo flirted with being legitimately SC relevant in 2018 averaging 57PPG playing big minutes in the backrow. Yeo’s injury interrupted 2019 sees him priced considerably below that career peak and should he perform well in the pre-season he’ll have some appeal as a set and forget CTW to carry you through the first 10-12 rounds.

Adam Doueihi - last season Doueihi took over as fullback at the Rabbitohs from round 17 and made a decent fist of it, he could be a decent mid-range option at CTW if he has a good pre-season.


Zac Lomax - Set to get first shot at making the fullback jersey his own at the Dragons, Lomax does not gain CTW status, he already was one, but he gains FLB and retains CTW status. If Lomax does win the job, and kicks goals, he could ease some of your pain at the position.

William Kennedy - The man-of-the-match in the Canterbury Cup NSW Grand Final, Kennedy played two games for the Sharks at fullback in 2019 and gains CTW status for 2020.

Nick Meaney - the flashy young Bulldog gains CTW designation after splitting his time between FLB and CTW in 2019 however, he has not proved to be SC relevant at either position to date.


OTHER POSITIONAL CHANGES
PLAYERS WHO HAVE LOST DUAL-POSITION STATUS

David Klemmer - loses dual FRF/2RF and is FRF only.

Josh Papalii - loses dual FRF/2RF and is FRF only.

Mitchell Moses - loses 5/8|HFB and is HFB only.

Martin Taupau - loses 2RF/FRF and is FRF only.

Valentine Holmes - When Holmes left the game to try his luck in the NFL he was a CTW/FLB. He has returned to the NRL for 2020 and will do so at FLB only.

Jayden Okunbor - loses his 2RF eligibility and is CTW only.

Dale Finucane - loses FRF/2RF and is 2RF only.

Nelson Asofa-Solomona - Seemingly big enough to play two spots at once, NAS nevertheless loses dual 2RF/FRF eligibility in 2020 to be FRF only.

Adam Blair - loses dual FRF/2RF and is 2RF only.

Kotoni Staggs - loses dual CTW/2RF and is CTW only.

Jeremy Marshall-King - after evolving from a half who could play at hooker into an 80-minute hooker, ‘JMK’ is HKR only in 2020.

Nick Cotric - the rise of Nicoll-Klokstad at the Raiders sees Cotric lose FLB to become CTW only.

Jacob Host - the popular 2019 cheapie started nine games last season all in the backrow (with a further eight games off the interchange) and loses dual FRF/2RF to be 2RF only.

Dunamis Lui - Lui loses his dual FRF/2RF status and will be FRF only.

Karl Lawton - The oft-wounded Warrior loses his HFB/HOK designation and is HOK only.

Tui Kamikamica - The Storm star of the future is a true middle forward not an edge and loses his dual FRF/2RF status to be just FRF.

Sione Katoa - He’s left Penrith to join the Bulldogs as backup hooker and leaves his dual position status behind him too, Katoa is no longer HOK/2RF and is now solely HOK.

Latrell Mitchell - Gains FLB so now dual CTW/FLB after making it clear that in 2020 his goal is to make the custodian jumper his own.

Cameron McInnes - gains 2RF status after playing periods in the backrow last year and with the Dragons having signed hooker Issac Luke in the off-season he looks set to play significantly more time at lock in 2020.

Anthony Milford - The Broncos were a bit of a mess through their spine in 2019 with Milford splitting his time between five-eighth and fullback. Pre-season talk is Milford will play five-eigth in 2020 but we’re throwing him dual 5/8|FLB designation anyway.

Brendan Elliot - Manly’s first-choice fullback Tom Trbojevic had a shocking run of injuries in 2019 and Elliot proved an able understudy in the position. He gains FLB/CTW dual status.

Jack Cogger - the Bulldogs playmaker gains 5/8 to go with his existing HFB designation.

Scott Drinkwater - after injury kept Drinkwater out of the game until round 15 last season, his hopes of retaining the fullback role at the Cowboys took a blow when the club signed Valentine Holmes. A former Australian Schoolboys half, Drinkwater is now a chance to shift to five-eighth for the club and so is dual FLB|5/8.

Jake Turpin - Turpin made eight starts in the laves for the Broncos last year and therefore starts 2020 with dual HOK/HFB status.

in 2020. He’s just as likely to play on the wing mind you, best bet would be to not select him in your team.

Kurt Mann - Another versatile Knight, Mann could legitimately be classified in three or four positions. However, with a maximum of two positions possible in the game we have placed him at FLB/CTW for 2020.

John Asiata - the big fella keeps his HFB eligibility but we’ve changed FRF to 2RF to better reflect his 2019 games and so is now HFB/2RF.

Tommy Talau - A half as a youngster, Talau made his NRL debut last year at centre and is favoured to turn that cameo into a full-time job in 2020 as such he is now classed at CTW.

For those interested in SC, the 2020 team picker is live https://supercoach.dailytelegraph.com.au/nrl/classic/#/teampicker

chucked a team together. will change a million times before round 1 but im happy-ish with it atm 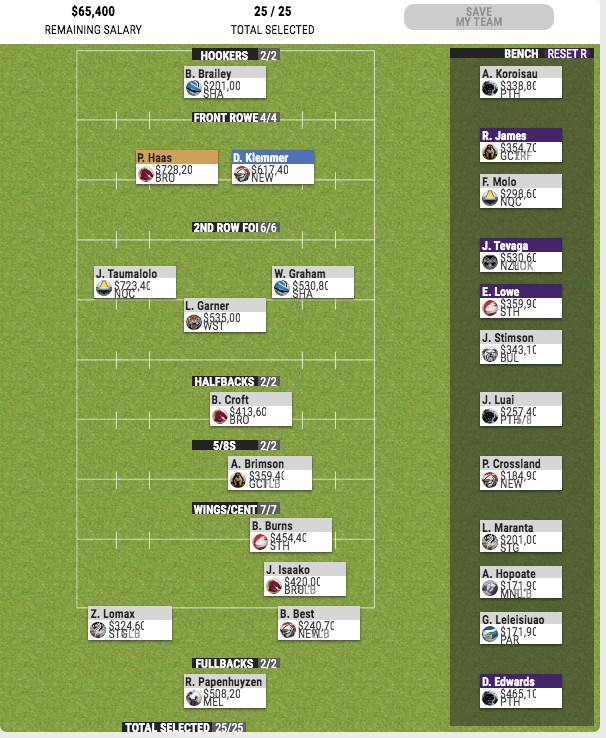 @t43597 wrote:chucked a team together. will change a million times before round 1 but im happy-ish with it atm

Thanks for the info, i ended up getting rid of him anyway
t43597 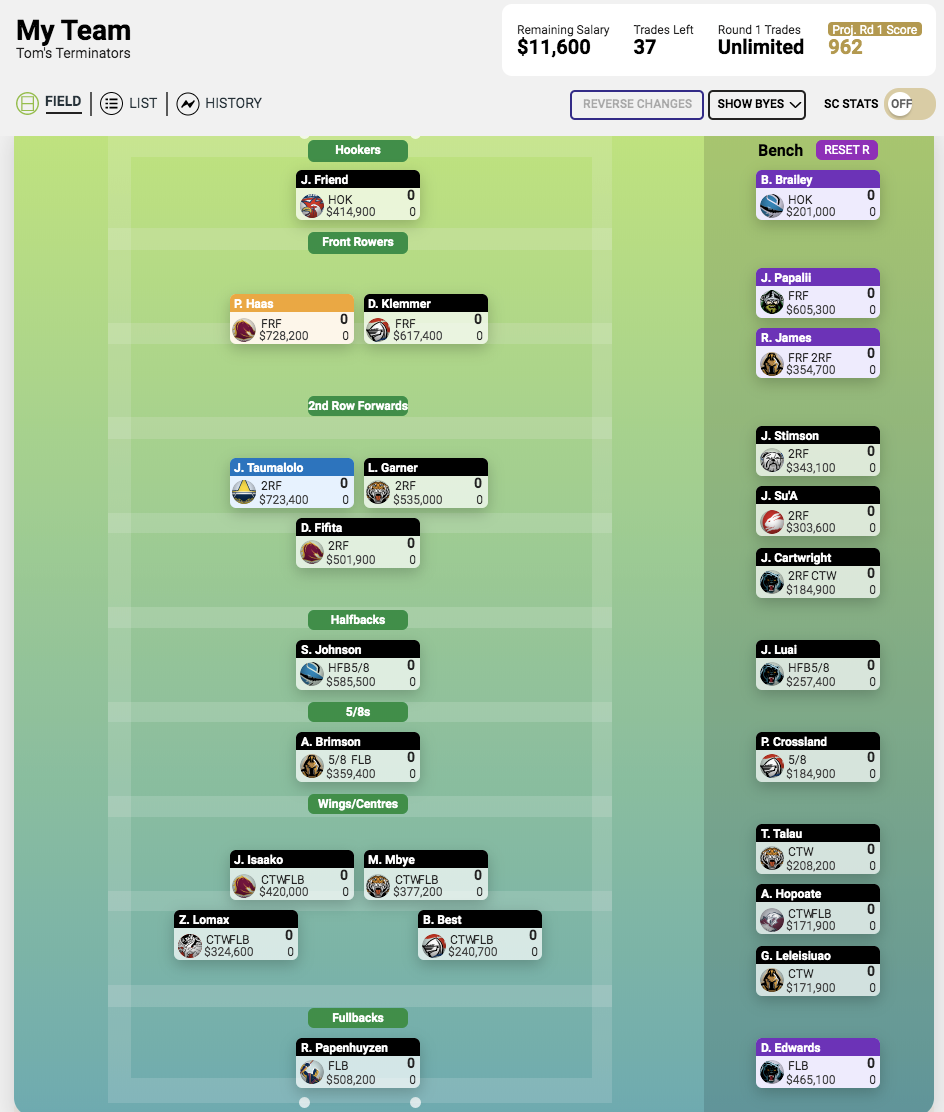