@MilfordTheMagician wrote:Page 51 party? More like Rabbit displaying how huge his dick is party

No, just putting a fuckwit in his place.

However, my dick is enormous, but I won’t post photos just yet

@Pain wrote:Once summer hits I'm heading up the coast for a swim with Rabbits.

You’d be most welcome Henchy. We use bulldozers to bury cattle up here. No one asks any questions.
multiple.scoregasms

Are you hosting the Brisbane meet up Rabs?
I'm sure a few would love to jump in that ring with you
Guest

@multiple.scoregasms wrote:Are you hosting the Brisbane meet up Rabs?
I'm sure a few would love to jump in that ring with you

There would be no takers. Just a lot of dweeby looking blokes sucking up to me for hours.

I get that everywhere. Without the dweebs 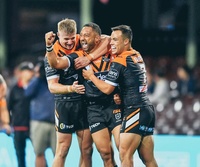 Milchy wrote:
Towards the end of the last thread, the Tigers chances of making the 8 were mentioned. A few years ago, we had a game at leichhardt in the last round where a victory worked secure finals football.
We kicked out on the full to start the game, and it went downhill from there.

I won't be surprised if this year ends similarly

So we have definitely improved our roster since 2016, have a much better coach, our defence is pretty good and our attack has looked a lot better in the last month or two

In all seriousness it was a gorgeous property.

However if we're measuring dicks the Mod Champ Champ wants to swing his around.
my tv broke

Wait so rabs hates queensland with a passion, but lives here? What a fraud!!

When ya inviting me over rabs.
White Lightning

Shite hasn't Kikau been poor this year. He looks smaller this year to me & he's lost the power & boom factor as a result. Is it the 2nd year syndrome after a great year last year.
White Lightning

2 things:
(1) when is Rabs going to post pictures of his wife &
(2) The Bulldogs would of beaten all those teams last night

Also a big thank you to Ivan Cleary for ruining my 80 minute machine that is JFH. Not having his work rate in the middle for 25 minutes while he was off probably cost them the game.
Pain

You’d be most welcome Henchy. We use bulldozers to bury cattle up here. No one asks any questions.

I think hench is a least 20 years younger than me

Had a feeling when they cut Kerr and left two backs as 18/19 that he’d come in. Was expecting bench but this way he actually gets a decent shot at it.
White Lightning

He's the son of Wendel so should have some good footy genes.
No Worries

Anyone on here use the Tribe App ? Most likely the Kiwis. Found it when researching RnT's tips on the Mitre 10 Cup site. It's fuckin brilliant, pick your sport, your teams, your comps, international, domestic and then you can set notifications and it's your one stop shot for all your score updates, team lists EVERYTHING !!! I keep finding more stuff. And it's free !!!
TBO

Greg Eastwood has scored a brace for Newtown. They're up 32-8 over the Magpies.
White Lightning

Ponga has the better last 3 games so I'd go him.
filthridden

Gut feeling that the Pongarail doesn't fire tonight. So either of the other two, probably TTurbo. All gut feel though.
Go to page :